From CAC Documentation wiki
Jump to navigation Jump to search

This tutorial introduces you to various ways in which you can use the MATLAB Parallel Computing Toolbox (PCT) to offload your computationally intensive work from your MATLAB client to Red Cloud. You do this through the MATLAB Parallel Server (formerly called the MATLAB Distributed Computing Server or MDCS, in releases prior to R2019a).

Overview of PCT and Parallel Server

What is MATLAB Parallel Server?

Quoting from The MathWorks:

Use the Parallel menu to choose the cluster where your PCT parallel workers ("labs") will run. Often this will be the local cluster, which is merely the collection of processor cores on the machine where your MATLAB client is running. (Local is the default unless you say otherwise.) However, you can also specify a remote cluster that has been made available to you through MATLAB Parallel Server.

MATLAB has multithreading built into its core libraries, but multithreading mostly aids big array operations and is not within user control. The Parallel Computing Toolbox (PCT) enables user-directed parallelism that allows you to take better advantage of the available CPUs.

This tutorial focuses mainly on batch-style usage, because such computations do not tie up the console of your MATLAB client. It is therefore a suitable way to offload work to Red Cloud--which is most often seen as a distinct resource for handling long-running jobs. But along the way, you will also get an overview of how parallel programming works generally in PCT. For more in-depth coverage, you can refer to The MathWorks' own documentation.

Two ways to use PCT, interactive vs. batch-style 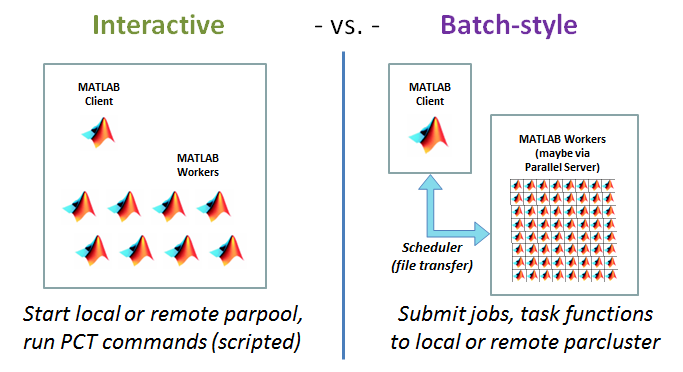 The MATLAB documentation presents a wide array of options for parallelizing your code with PCT. The parallel execution strategy depends on the specific commands that are chosen. We'll start with commands that would be more typical of interactive work. The interactive pool of workers can exist on your local laptop, or on a Parallel Server cluster like Red Cloud.

The MathWorks provides a complete list of PCT functions and details on how they are used.

Built-in functions that can use a parpool automatically

Certain MATLAB functions will use an existing parpool if one is available. Examples may be found in the Global Optimization toolbox (e.g., fmincon), the Statistics and Machine Learning toolbox, and others. To make it happen, simply set the 'UseParallel' option to 'true' or 'always' or 1. Check the MathWorks documentation for details. This is an easy method for enabling parallel processing when your computations are concentrated into just one or two built-in functions.

Within a MATLAB session, submitting jobs to a MATLAB Parallel Server in Red Cloud follows a general pattern:

Batch-style PCT has 3 types of jobs: independent, SPMD, and pool.

Experience has shown that independent jobs work the best for running parametric sweeps. SPMD jobs could serve for this, but execution would be more synchronized than necessary. Perhaps a pool job seems most natural for doing this, especially if you are accustomed to running parametric sweeps using a parfor loop and a local pool. But in a pool job, one worker is essentially wasted, as it does nothing more than manage the loop iterations of the other workers. Therefore, for Red Cloud, consider converting your code from the parfor style to a collection of independent jobs and tasks; it should be a relatively easy process.

This tutorial will cover only very simple examples of independent, SPMD, and pool job submission. If you need help with any of the commands please be sure to make use of MATLAB's built-in help function.

For this example we’ll consider a trivial function that takes any input and waits 5 seconds before returning the input value. We will run this function locally, then compare with distributed execution in Red Cloud.

Running simple_independent_job in your local MATLAB window should yield (after a pause):

To run it on MATLAB Parallel Server, we will use the createJob function. Here is an example of running the same code on a 2-core instance in Red Cloud. We assume that the instance is already validated, and that it is the default cluster in the Parallel menu.

This by itself is not that interesting, but let's pretend we want to run simple_independent_job 10x in a row. Running locally in serial, this should take 10x5 = 50 seconds.

But if we run it as a PCT independent job, we can make it finish faster. Note that we don't have to upload a copy of the "simple_independent_job.m" file to the Red Cloud instance in advance because the AutoAttachFiles property is true (logical value 1) by default.

The independent job takes 30% less time to run than it did in serial. Since there are 2 workers, one might expect a speedup of 2 rather than 1.43, but there is an overhead associated with time to submit the job and retrieve the results from the remote server. Calling fetchOutputs on the job object yields the results of the 10 tasks.

A SPMD job is meant to be run in parallel on multiple workers that know about each other and can therefore work as a team. The workers ("labs") can even communicate with each other using an MPI-like syntax (summarized below).

For this example, we won't go into the details of inter-worker communication. We will merely demonstrate that each worker receives a unique index that can be used to assign unique work to it. Here's a trivial function that illustrates the role of labindex:

Running this function locally just produces the answer "1", because no parallel workers are requested or defined in the function itself. However, if the same function is submitted in a SPMD job, then each worker runs the body of the function and returns a different answer, just as if the body of the function were running inside a MATLAB spmd block. To show this, we'll again assume that a 2-core instance is already running in Red Cloud, and that it is set up to be the default cluster in the Parallel menu:

The above cell array can be converted to a simple array with syntax like a = [ans{:}].

For this example we'll consider yet another trivial function that pauses 1 second 50 times in a row before returning the input value.

Running the code locally we might we would expect the function to take 50 seconds to run. What happens if we change the for for-loop into a parfor-loop (by moving the comment sign to the previous line) and run it as a pool job in Red Cloud? Let's assume that our Red Cloud instance with two MATLAB labs is still active and the default profile still points to it:

But wait, running our parfor-loop in a pool job with two labs appears to be far slower than running our original for-loop sequentially! This is because in this example, only 1 worker executes the parfor-loop. The other worker in the cluster acts as a "manager" whose role is to run anything in the main script that isn't in a parfor or spmd section. The parfor-loop thus takes longer, due to the overhead involved in submitting/retrieving the job.

Accordingly, pool jobs only make sense if there are quite a few workers besides the manager to run the parallel tasks.

Note: If we were to submit this same job to the local cluster, assuming a 2-core personal workstation, we would get 2 labs for the pool job. The reason for this difference is that the MATLAB GUI is already running on the local machine, so there is no need to assign one worker as a manager. (Try it—but don’t forget to switch back to Red Cloud when you’re done!)

Comparison with using a pool in Red Cloud interactively

Submitting batch jobs to a MATLAB cluster in Red Cloud has the advantage that it frees up the MATLAB client on your workstation to do other tasks. However, there are times when it makes sense to run a fast parallel computation in real time, so that you can get results in (say) minutes instead of hours.

You can use the parpool command to start a pool on your cluster in Red Cloud, after which any PCT commands will be sent to the workers in Red Cloud. In fact, if Red Cloud is your default cluster, then any parfor or spmd block that you enter in your MATLAB client will automatically open a pool using the Red Cloud workers.

Simply issuing the parfor command within the function triggers MATLAB to start a pool of workers on the default cluster, and it then uses the pool to execute the loop. When running in interactive mode, the role of manager is performed by the front-end MATLAB client. Therefore, in this case, there really are two workers to execute the parfor-loop, and it runs almost twice as fast. However, as before, parallel overhead prevents the code from running exactly twice as fast on two labs. The final command closes the pool after running the example.

Here's an example of a common problem and how to diagnose it. It is very easy to forget to upload one or more files that may be needed by your task. The AutoAttachFiles property can help with this, but it only looks for program files (.m, .p, .mex). If you neglect to list your data file in the AttachedFiles cell array, the result will be something like this:

Note the next-to-last line "Task ID of Errors". This indicates that one of the tasks had an error. In the console, the "1" serves a link to error information. But we can also view details of the error by inspecting the task object associated with the job:

You can view just the error message by entering job.Tasks(1).Error.

Another good way to get information for debugging purposes is to examine the console output of one or more of the tasks. To do this, however, you will first need to set the CaptureDiary property of the chosen task(s), prior to job submission:

If you also insert a few calls to disp() into your task function before running your job, you might get a better understanding why a task might be failing. Once the first task finishes, you can view its console output by entering job.Tasks(1).Diary.

Does your MATLAB computation require hours or even days to run? You'll be glad to know you can exit MATLAB completely and re-open it later to check on the status of a job that takes a long time to complete. For the sake of example, let's create a job that waits for 5 minutes, then returns. For this example we will just call the built-in pause function and will not attach or upload any code.

Note that the job is in the state "running". Assuming we did not do wait(job), it is now possible to use the MATLAB client for other things, or even to exit MATLAB entirely and start a new MATLAB session later. To retrieve information about the previously submitted job, we use the parcluster and findJob functions to retrieve the job that was running. (Note, the cluster must be up and active in Red Cloud for this to work.) Hopefully we remembered to record the "Job ID" from the previous session...

We see that the "Running Duration" has advanced by 3 minutes. If you decide later that you do not want the job to complete you can cancel the job using the cancel function.

The error in this case is simply a notification that the job was canceled.

If you forgot the ID you can inspect the Jobs field of the MJS Cluster object that was returned by parcluster.

Distributing work with parfeval and batch

How to distribute work without PCT or Parallel Server

- Make sure each executable receives a different input parameter - On an interactive Linux machine, run each task in the background (&) – On a cluster, remember that mpirun can launch non-MPI processes, too

When Is File Transfer Needed?

MATLAB can copy files... or you can

Are GPUs really that simple?

Are GPUs available in Red Cloud?